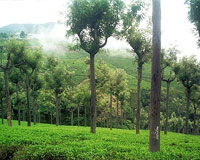 Enveloped by lush green grasslands, dense forests and lofty mountains, Ooty or Udagamandalam has rightly earned the epithet of being the Queen of Hill stations. Ooty is known world over for its picturesque locales and serene beauty. The hill station throughout the year enjoys a pleasant climate, with the summer temperature touching a high of 25º C and enjoying a low of 10º C. Ooty stands at an altitude of 2240 m above sea-level and is visited by people from all over.

Bounty of nature is easily visible here and people leave no opportunity to take a walk in the lanes of Ooty with the Nilgiri hills towering over and verdant grasslands spread around. The Doddabetta hill of the Nilgiri ranges is the highest peak of Ooty, standing erect at 2636 m. The hill station is a perfect place to unwind and take a break from the monotonous fast paced lifestyles.

Originally inhabited by the tribe of the Todas, Ooty was taken over by the British in the 1800s. A British named John Sullivan was the man behind the development of Ooty and laid the narrow gauge rail line to Mettupalayam, which just 2 Km away from Ooty and the last station of the Nilgiri railway. Having a ride in the toy train is an experience for lifetime which the kids as well as the adults are never able to forget.

Ooty is also known for a lavish spread of tea and coffee plantations. The annual Tea festival organized by the tourism department is a major attraction when you can sip the finest tea here. It is advisable for tea-lovers to pick up the samples of various tea brands produced here. The hill station also offers traditional silver jewellery, woolens and shawls woven by the Todas. Many natural products like honey, eucalyptus oil and various medicinal herbs and condiments are also available here.